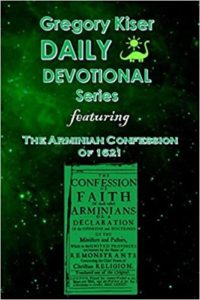 Some writings are just meant to be read over and over. And it was through The Society of Evangelical Arminians (SEA) that I first encountered an English translation of this old Dutch Reformation document translated by Mark A. Ellis. I read it a few years ago when it was first announced on SEA’s site, and I bought my own copy (a monograph-style book containing both the Latin and English side-by-side). I even looked up all the verse references and found several missing ones, or wrong ones, and/or typos. Of course, no offense to Mr. Ellis at all. The meat of the document is all there, and it is fantastic.

But a monograph (8 1/2″ x 11″) is hard to carry around. Also around this time SEA put the document in HTML on this website. I also noticed that LOGOS (TM) Bible software also published a copy which I bought as well. It duplicated all the errors I had discovered in the Scripture references.

You might wonder why I am so excited by this document. Well, it is a long story actually, but one that can be summed up pretty quickly. Like most Western Christians, I was raised in church yet I actually did not know the history of the church. And this is really sad because it can lead to a disaster as it did for me. When I say, “disaster,” I do not mean physically, but doctrinally. Not being grounded in the rich history and fundamentals of the Christian faith, and, more importantly, why I believed what I did, I fell prey to aberrant doctrines that led me astray for several years. I fell in with what I now deem as a horribly dark eschatological heresy called, full preterism (or, hyper-preterism).

Full (or hyper–) preterism is a view that teaches that the Second Coming of Christ occurred in and around Jerusalem in AD 70 when the Romans destroyed the city and the Temple. I have never met a full preterist (and I was one for 15+ years) that agrees with any other full preterist on key doctrines. The divisions among full preterists are equal to its number of adherents. And none of them have any respect for spiritual authority and so do not usually attend a local church. They all (including me at the time) deem their own interpretation of the Bible to be the sole determination of authority. In other words, they are themselves, the highest authority. They will tell you their only authority is the Word of God. But the truth is when they say that, they mean, “My interpretation of the Word of God is my only authority.” Of course, studying church history for five minutes will reveal that this is what every form of heresy says about itself.

I did not realize it at the time, but this form of eschatology slowly began to erode every single fundamental doctrine of the historic Christian faith in my life. It literally changes the view of everything, not just eschatology. It distorted the sacraments (baptism & communion), what the word “salvation” actually means, the Lord’s prayer, church government, gifts of the Spirit, the Law, evangelism, and, worst of all, it distorts and horribly disfigures the doctrine of “resurrection” in every way; not only Jesus’ resurrection, ascension, and coming, but also our very own resurrection and its definition.

When I became frustrated beyond my tolerance, I cried out to Jesus for the truth. He answered through a couple of Christian brothers who were, ironically, five–point Calvinists. But these two brothers used to also be involved in this movement and had come out of it because of their strong foundation in church history and the whys of their Christian faith (Presbyterian). I believe with all my heart my Savior sent these men across my path to pull me out of the doctrinal mess I was in. How did Jesus do it? By inspiring these brothers to point me to two things: a study of the history of the church and a study of the ancient doctrines (i.e., the confessions, catechisms, and councils). I thought it was a stupid suggestion at first, but I have learned when you cry out to Jesus in sincerity for help, he often answers in the most unlikely places; in this case, Calvinists, helping an Arminian.

Taking their advice I was immediately humbled. I quite literally fell to my knees in repentance when I heard the Lord’s voice deep inside of my heart say simply, “When you meet me, I will have hair on my knuckles.” This is an inside joke he did with me and something I do not have time to explain. It brought laughter and humility all at the same time. The gist of this statement by the Lord in my heart is simply this: Jesus Christ is still a man; albeit, an immortal, glorified, man, but eternally incarnate in a physical body. This one fact alone destroys the very foundation of all forms of hyper-preterism. And, it brought peace, joy, grace, to my soul, and restored me in a way only he, the Shepherd of our souls, can do.

So, I said all that to say this: That is why I am extremely interested in The Arminian Confession of 1621. No, even though two loving Calvinist brothers helped me out of hyper-preterism, I did not become a Calvinist. In fact, studying the history of the church right up to the Reformation years, restored and solidified my faith that Arminianism is the biblical view of soteriology.

Thus, being zealous for the ancient Christian faith, I love knowing the fundamentals and being fully grounded in them. I see the need not only in my own children but in the church (especially Western churches) as well. In my personal life, on a daily basis, I read these three documents over and over:

I also love to recite these creeds daily: The Apostles’ Creed, The Nicene Creed, and The Athanasian Creed.

Some Arminians might be shocked to find out, that Jacob Arminius himself adhered to both The Heidelberg Catechism and The Belgic Confession (see here), given the fact that Calvinists very often claim these exclusively as their own. But Arminius agreed to them “as written.” He did not adhere to the Calvinists’ interpretation of some of the things in them, but “as written” he agreed with their answers and statements and even stated this publicly much to their chagrin. It caused the Calvinists to want to revise them so that Arminius (and those so like-minded) could not agree with them.

But the Arminian Confession of 1621 was written mainly by Simon Episcopius and the Remonstrants who were “Arminians” after Jacob Arminius had died in 1609.

Since I wanted to review these documents on a daily basis, as devotionals, and to constantly reinforce the fundamentals of my faith, I divided them up into small daily chunks that could be read in less than five minutes. And, mainly for the sake of my daughters and grandchildren, I created two books that are available on Amazon in Kindle form or print-on-demand paperbacks. These two books are:

“GKDDS” just means, “Gregory Kiser Daily Devotional Series.” I plan on doing more than these. I am currently working on a catechism written by Jacob Arminius’ father–in–law. Fascinating!

Of course, I obtained permission from Mark A. Ellis to present his excellent translation in this form. And he helped me by supplying the document both in Latin and Dutch so I could add the missing Scripture references, correct the ones that were wrong, and fix the typos. I also utilized the headings that I discovered in the 1684 English translation of this confession that Mr. Ellis referenced in his bibliography. These headings are not present in Ellis’ monograph book, nor in SEA’s online HTML version, nor in LOGOS (TM) Bible software’s version. These headings are very useful, to say the least. They make it much easier to find concepts you may search.

So, my prayer for you is simply this: that the Lord may help enrich the foundation of your faith with these old documents in the form of devotionals. And may you never be led astray by or fall prey to the enemy’s many distortions of our precious foundational and historically rich Christian faith in Jesus Christ, who is alive, resurrected, exalted, immortal, eternally incarnate, and blessed forever, amen!