This is part of a series of posts on Romans. The main focus of this series will be chapters 9-11 of the letter. These chapters, particularly chapter 9, have been interpreted in various different ways. My aim is to demonstrate what I consider to be the correct interpretation. I will do this by considering the structure and context of the letter and then focusing in on these chapters, showing how the proposed interpretation fits with the context and structure of the letter, as well as being internally consistent within chapters 9-11. Click here for the contents page.

After considering Romans 11:1-6 in the previous post, now we’ll continue with verses 7-10.

Having established that God has not rejected the ethnic Israelites, Paul goes on to explain what has been happening “at the present time” (i.e. Paul’s present time – see verse 5):

“[7] What then? Israel failed to obtain what it was seeking. The elect obtained it, but the rest were hardened,”

Because so many of Paul’s fellow ethnic Israelites have not trusted in Christ, he uses the word ‘Israel’ to refer to the unbelieving ethnic Israelites, saying that “Israel failed to obtain what it was seeking” (see Romans 9:31-32 for another example of the word ‘Israel’ being used in this way). They were seeking righteousness but wanted to obtain it themselves rather than accepting the offer of Christ’s righteousness (see Romans 10:3).

Paul divides ethnic Israel up into “the elect” and “the rest”. This is very important in understanding who “the elect” are, as we will see. This diagram shows the situation: 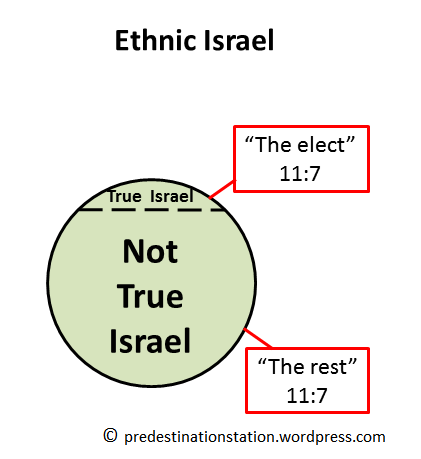 Paul goes on to talk about “the rest” (picking up from verse 7):

However, let’s see what Paul has to say about this. Does Paul think that none of these non-elect ethnic Israelites will ever be saved? Let’s read through the rest of this section with only this question in mind:

Paul thinks that non-elect people, who have been hardened, can be saved!

Another understanding of “election”

The people who take this view therefore see the hardening of the non-elect that Paul speaks of as being permanent and unchangeable, such that they never will trust in Christ. They tend to argue that when Paul speaks in the following verses about more ethnic Israelites coming to faith, he is speaking of different ethnic Israelites than those who have been hardened. If we apply this consistently, the following situation arises. In verse 7, Paul states that the elect ethnic Israelites “have obtained” righteousness (i.e. this has already happened), while the rest (i.e. all other ethnic Israelites) have been hardened. If the hardening is permanent and cannot be changed, then Paul is teaching that every ethnic Israelite alive at his time of writing who is not already trusting in Christ never will trust in Christ. Paul would therefore have no hope for the salvation of any of his fellow ethnic Israelites that he is upset about (see 9:1-5). However, in Romans 11:13-14, Paul goes on to say:

“[13] Now I am speaking to you Gentiles. Inasmuch then as I am an apostle to the Gentiles, I magnify my ministry [14] in order somehow to make my fellow Jews jealous, and thus save some of them. “

It is clear that Paul has hope for the salvation of at least some of the ethnic Israelites who are alive at the same time as him, who have not (yet) obtained righteousness, and who have been hardened. Therefore we can reject any interpretation of the text that has Paul teaching that none of these ethnic Israelites can be saved. The understanding of election/non-election as being eternally and unchangeably applied to individuals is therefore inconsistent with Paul’s teaching.

Similarly, those who are “in Christ” share in Christ’s chosenness, as Christ is “the Chosen One of God” (see Luke 9:35, John 1:32-34 (NET Bible, including notes), and Isaiah 42:1 (with Matthew 12:18)). Just as, before a person becomes a Christian, they have no righteousness to claim as their own, so a non-Christian also has no chosenness of their own unless and until they can claim Christ’s chosenness through being “in him”.

Every spiritual blessing that the Christian has is “in Christ”, including the spiritual blessing of being chosen/elect (Ephesians 1:3-4). That is why Paul can say that God the Father “chose us in him [Christ] before the foundation of the world” (Ephesians 1:4), while also saying of himself individually that Andronicus and Junia “were in Christ before me” (Romans 16:7). Paul was not always in Christ, but only became in Christ when he began to trust in Christ for salvation. Once he became “in Christ”, he became “righteous”, “seated in the heavenly places” and “chosen before the foundation of the world” – all because these are true of Christ and therefore became true of Paul as he became “in Christ”.

This understanding of election is known as “Christocentric election” or “corporate election” (I prefer the first term as it recognises Jesus as the centre of the chosenness). We will continue in Romans 11 in the next post.

This was first published at the Predestination Station, where comments can be made.