Home Arminianism Kevin RK Davis, “How Can Faith Be A Gift?”

It has been mentioned elsewhere on this blog, predominantly some of the stationary pages on the menu up top – that Arminianism and Calvinism aren’t opposing theologies. If this is news, read those blog posts. John Wesley said that his theology differed “an hair’s breadth,” (so I corrected his grammar above) from Calvinism. Arminius himself had a few small, albeit significant differences from the Reformed tradition he is a part of (no, he didn’t come out of).

As I swam around in some Calvinism and came up out of it – slightly – I’ve always wondered what faith looks like in a mindset that doesn’t believe God coerces unwilling believers to come to Him, but rather draws them in love.

Though I did dip in Calvinism, I nevertheless grew up in the Wesleyan-Arminian tradition, the Nazarene church. I also went through Nazarene Bible College, and doing so, I was told to read John Wesley’s A PLAIN ACCOUNT OF CHRISTIAN PERFECTION. If you’ve ever read anything of John Wesley, you’ll find there’s nothing plain about it, but rather, weighty, sophisticated, wordy stuff that takes sentence-diagramming and aspirin to decipher. Okay, maybe I embellish.

I confess here to the world wide web that I never got all the way through Wesley’s plain account.

Feeling guilty (that’s a spiritual gift of Nazarenes), I decided that I would love to ingest some of Wesley’s material, but at much more edible dosage. So I found a used copy of RENEW MY HEART by John Wesley. It’s 365 small daily-devotional studies from Wesley’s writings. They’re expensive to get new, I’d encourage you to poke around on eBay, or Amazon’s used stores to look for it. I picked it up, along with 3 heavily Calvinist-authored devotional books. At the time I picked it up, I was on the in-road into my Calvinism. So I bought Wesley thinking, “I better have a good proponent of Arminianism to weigh against my theological journey towards the forbidden fruit outside of my upbringing.”

I was surprised to say the least. Why? Wesley preached and wrote like a Calvinist! In my mind, at that point!

SO, KEVIN, THE TOPIC AT HAND? THIS ‘FAITH’ THING?

One of the common charges leveled against Arminians by Calvinists is amazing, because it goes against an argument from Paul. That is, Calvinists seem to insinuate – and some outright state – that we should never ever say that faith exercised by the believer is a grounds for salvation, only God’s grace. The former would insinuate that I have to do something meritorious for my salvation. This is exactly what Paul is arguing against in Romans 4, that faith exercised by a human being, though necessary for salvation – is somehow meritorious.

2 If Abraham was justified by works, he has something to boast about, but not before God. 3 What does the Scripture say? “Abraham believed God, and it was credited to him as righteousness.”

4 Now to him who works, wages are not given as a gift, but as a debt. 5 But to him who does not work, but believes in Him who justifies the ungodly, his faith is credited as righteousness. – ROMANS 4:2-5 MEV

Paul puts up a contrast here: faith versus works. He explicitly does not say that one is the other. Righteousness is credited to Abraham because Abraham believed (faith, see v5, where Paul uses “believes,” and “faith” interchangeably).

It seems to me, that Paul has no qualms about stating that Abraham believed, and crediting salvation at the same time solely to God. This is not a logical mind-bomb. I believe that Donald Trump is President of the USA, I did nothing to to get him there, in fact I cast a vote against him (for character reasons). My believing he is there has no bearing on any work I’ve done, and in fact if I didn’t believe he was there, he’d still be there.

I believe Christ is the Savior of the World, and by His death, burial, resurrection, and His propitiation for my sins, I am saved. My belief in Him did not bring Him to the Cross, neither does the unbelief of the lost negate His coming to the Cross. BUT:

The Bible knows that faith taps into the grace of God in order to save us. Paul says one chapter further in Romans 5:

1 Therefore, since we have been justified by faith, we have peace with God through our Lord Jesus Christ, 2 through whom we also have access by faith into this grace in which we stand, and so we rejoice in hope of the glory of God – ROMANS 5:1,2, MEV, emphasis mine

Consider it this way: it takes oxygen for me to breathe whether I believe it or not. However, I can disbelieve my need for oxygen to my harm… the second I put a stone around my neck and jump into the water to prove all those phony scientists that I don’t need oxygen to breathe. So in a small sense, my belief, my knowledge that I need oxygen to breathe will guard me from harm. So it is with Christ. If I know Him to be my Savior, Lord, life-source, joy, salvation, I will and should guard against unbelief.

Faith is the access into grace. If I have a mansion gifted to me, and then I show up to the front door, how do I get in? A key. The mansion is Salvation. I show up to the door. What’s my key? Faith. The mansion does nothing to house me, if I have no key. God says to the world, “Here’s the mansion, please bring the key I’m sending you.”

So are we gifted the key? Did God send not only His Son, but faith? Faith, not being a physical thing like His Son Jesus, can God gift that to us as well? Calvinists, I think from a desire to shy away any human cooperation in salvation, will slam on this concept, that our very faith is a gift. There is no human component in salvation, so God gives us faith.

I didn’t know what to believe for the longest time, when I started having Calvinist doubts. I certainly didn’t want to have pride, nor did I want to even suggest the slightest modicum of human-cooperation in salvation, because for Salvation to be of the Lord is of great comfort to me. It means that it rests all on him (I still believe that, and it is still of great comfort of me, and I am no longer Calvinist).

I told you John Wesley sounds like a Calvinist. In the January 2 entry of RENEW MY HEART, which in turn is taken from “Sermon I – Salvation by Faith,” John writes: 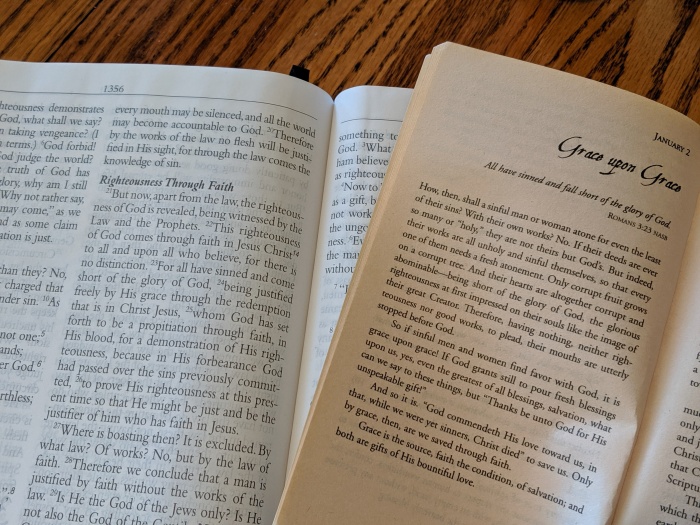 “God commendeth His love toward us, in that, while we were yet sinners, Christ died” to save us. Only by grace, then, are we saved through faith.

Grace is the source, faith the condition, of salvation; and both are gifts of His bountiful love.

Wesley believes grace and faith to be both gifts. How then, is the gift of faith given? Maybe these are bad caricatures, and I state the following in preference to my personal consumption of Calvinism, not necessarily a reflection on what I believe Calvinism, or Calvinist preachers / teachers everywhere teach. I saw both grace and faith as supernatural, mystical, implanted opposing forces onto unwilling hearts. In other words, just as wizards, hypnotists, and brain-washers might manipulate people to do things against their will, so I believed God was a benevolent manipulator of human hearts and minds causing them by magical coercion to do what’s contrary against their nature: namely, do good, believe good, love good, and it all went against our in-borne depravity. I never worded it that way, nor do I think it’s 100% appropriate or fair to word it that way. It makes it sound bad, to make all the wizardry comparisons.

Calvinists might agree here, but what I believe about Arminianism, and if I’m right, what it teaches, is that grace and faith, as Wesley stated, are fruits and gifts borne out of God’s love. Furthermore – love – by definition, is proposed with the hope of reciprocation, not imposed against one’s will, in other words: resistible.

Faith is a gift borne out of love. We often say pithily as Christians around Christmastime, “God gave us the greatest gift, His Son Jesus.” The Bible gives God a little more credit. James, the brother of this great gift of God, states, “Every good gift and every perfect gift is from above and comes down from the Father of lights,” (James 1:17 MEV).

Even so, we know that the greatest gift of Jesus is borne out of God’s love, “For God so loved the world that He gave His only begotten Son, that whoever believes in Him should not perish, but have eternal life,” (John 3:16, MEV).

When God loves, He gives. That’s what spurs us on to giving, most of the time it should. For Mother’s Day, I purchased my beautiful wife and mother of our children a gift. We try to practice the Five Love Languages, one of her’s is gift-giving. So even though she works once day a week at the local hardware store (to find sanity and adult conversation away from home – and sometimes I should state adult conversation minus theology, living with a nut like me), I often get her flowers just because. All this to say, my love for her spurns my gift-giving. I wonder if there are unseen gifts given to her out of my gift giving. Sure, she receives flowers, or chocolates, or jewelry, but the unseen gifts I’m giving her are more reasons to know that I do love her, faith in my commitment to her, appreciation, knowledge to know that I do think about her (and not just theology), etc.

The faith that is given to us as a gift borne out of God’s love, is beheld at the Cross. This is why Paul mingles the concepts so closely together that some theologians like to bicker about Ephesians 2:8:

For by grace you have been saved through faith, and this is not of yourselves. It is the gift of God, – EPHESIANS 2:8 MEV

The bickering is about “What is the gift of God? Is it the grace? Is the saving part? Is it the faith? Is it all of the above?” What if God’s grace, our faith, and our salvation are all found at the Cross? His saving us? God’s greatest expression of grace is the kindness afforded to us that He’d become flesh and die for us and take our place! That is unmerited favor! That is scandalous kindness! God pulls us out of many blunders, providing for us when we’ve been dumb with our finances, sparing us from undue harm when He doesn’t answer prayers, but He undoubtedly saves us in the best degree when He propitiates God’s wrath at the Cross! Finally, Hebrews 11 tells us that many people in the past had faith through many different circumstances. Noah trusted God to save him in an ark. Abraham trusted God by leaving his homeland, and trusted God’s intentions when called to sacrifices his son. But the greatest trust, the greatest fidelity, the greatest faith in God is seeing His kindness, His grace, His salvation, His love at the Cross and saying, “I have faith in Him.” God’s kindness and love has borne the very faith we have in Him.