Home Scripture Index 1 Timothy 2:4-6 Harry A Ironside, “He ‘gave Himself’” 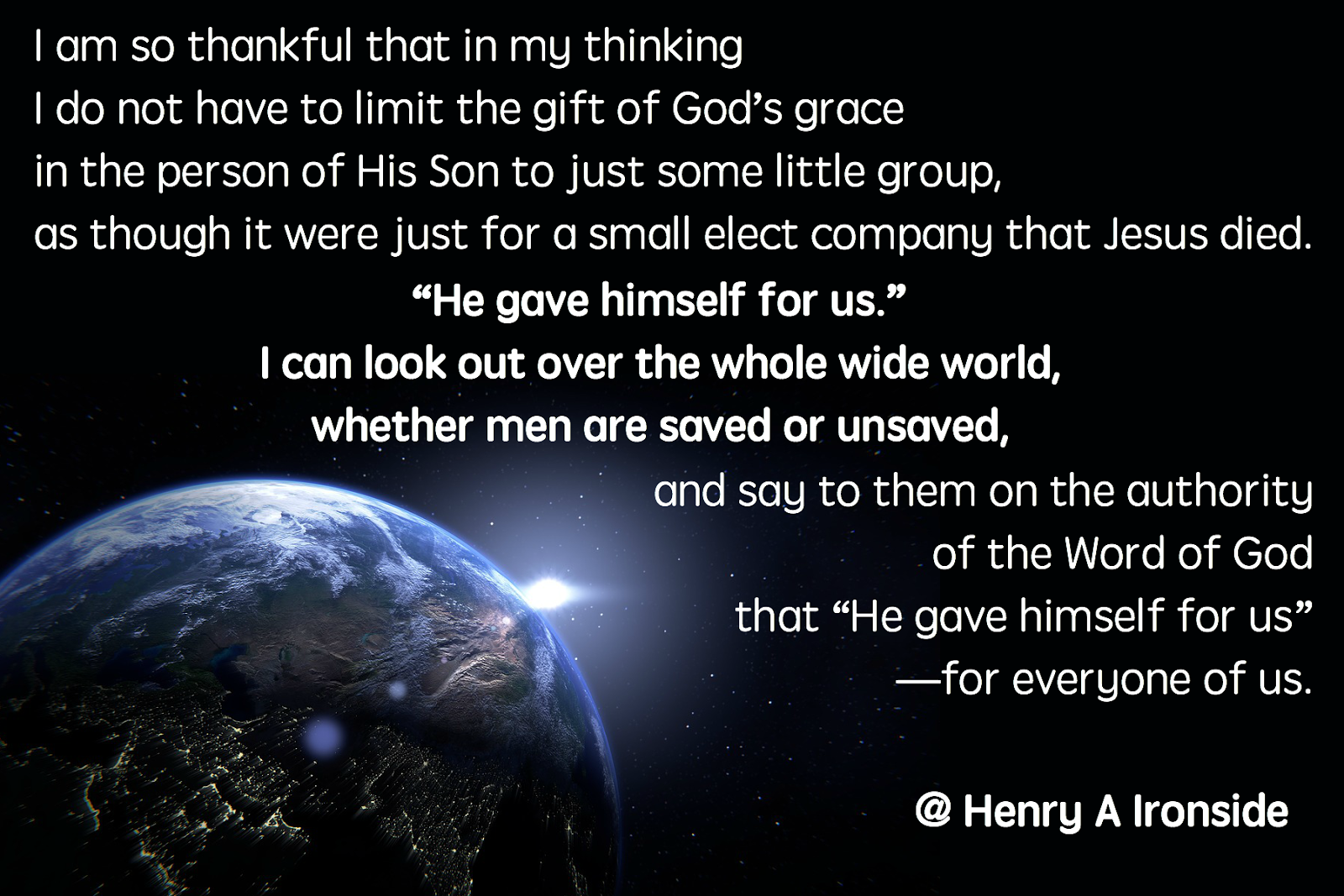 Below is an excerpt from chapter 3 “Substitution”, in Henry A Ironside’s 1944 book Great Words of the Gospel (works in the public domain; bold below mine):

I do not have one particular text in mind, but I have been thinking of five different passages in the New Testament where we get the same expression—He “gave himself”; and I want you to think with me of these scriptures. The One who gave Himself was our Lord Jesus Christ, and I should like you to notice what it was for which He gave Himself.

In the Epistle to the Galatians, chapter 2 and verse 20, the apostle Paul writes:

I am crucified with Christ: nevertheless I live; yet not I, but Christ liveth in me: and the life which I now live in the flesh I live by the faith of the Son of God, who loved me, and gave himself for me.

Note the individuality of it. Paul, who had been a bitter persecutor of the people of God, who had been an enemy of the Cross of Christ, one day had his eyes opened, and he suddenly realized that the One who died on that cross went there for him, that He had taken his place, that it was love that led Him to go to that shameful death. From that moment the heart of Saul of Tarsus went out in adoring gratitude to our Lord Jesus Christ, and until the very end of his days he found his greatest joy in trying to give some evidence, by a life of service, of his love for the One who had thus loved him.

Notice how he speaks of Him: “The Son of God, who loved me, and gave himself for me.” There you have the very heart of the Gospel—“Himself for me.” That is substitution. Some people tell us, because we do not find the actual word “substitution” in the Bible, that the truth of it, the fact of it is not there, and so they talk of atonement by other means than by substitution, atonement by example or atonement by reconciling love, that leads men to turn to God adoringly, simply because of the goodness that He showed in seeking them out in the person of His Son. But no, the Word of God makes it very definite. The work that took place on Calvary was a substitutionary transaction. It was the Lord Jesus Christ, God’s own blessed, eternal Son, who became man for our redemption, giving Himself on our behalf.

But it is not only for me, it is also for us. In the Epistle to the Ephesians, chapter 5 and verse 2, we read:

And walk in love, as Christ also hath loved us, and hath given himself for us an offering and a sacrifice to God for a sweet smelling savour.

I am so thankful that in my thinking I do not have to limit the gift of God’s grace in the person of His Son to just some little group, as though it were just for a small elect company that Jesus died. “He gave himself for us.” I can look out over the whole wide world, whether men are saved or unsaved, and say to them on the authority of the Word of God that “He gave himself for us”—for everyone of us. Whether you be Jew or Gentile, whether you be very religious or have no time for religion, I would say to you, “The Son of God gave himself for us.” He saw us in our lost condition, and He went to Calvary’s cross in order to redeem us. That is how the Prophet Isaiah puts it. He looked on down through the centuries and by faith he saw the very scene of Calvary, and he cried out, “He was wounded for our transgressions, he was bruised for our iniquities: the chastisement of our peace was upon him; and with his stripes we are healed.”

Next we do have a special group mentioned for whom He gave Himself. In the last part of the fifth chapter of Ephesians, in the twenty-fifth verse we read:

Husbands, love your wives, even as Christ also loved the church, and gave himself for it.

When we get home to Glory, when we who have been redeemed to God by His precious blood are presented faultless in the presence of our heavenly Bridegroom, we shall look up into His face and we shall be able to say, “The Son of God loved the Church, and gave Himself for it.”

You remember the story that is told of one of the generals of Cyrus the Great, king of Persia, and the one who overthrew, in God’s providence, the mighty Babylonian Empire. One of his generals came home from a campaign and was shocked to find that in his absence his own wife had been arrested and was languishing in prison, charged with treachery against her country, and the trial was to be held that very day. The general hastened to the court of Cyrus, and the guards brought in his own beloved wife. She, poor woman, pale and anxious, tried to answer the charges brought against her, but all to no avail. Her husband, standing near, heard the stern voice of the Persian ruler pronounce the death sentence. In a moment, as they were about to drag her away to behead her, he ran forward and threw himself down at the feet of the Emperor. “Oh sire,” he cried, “not she, but me. Let me give my life for hers. Put me to death, but spare my wife.” And as Cyrus looked down upon him, he was so touched by his deep devotion and his love for his wife that his heart was softened. He remembered, too, how faithful this servant had been, and he gave command that the wife should go free. She was fully pardoned. As her husband led her out of the room, he said to her, “Did you notice the kind look in the eyes of the Emperor as he pronounced the word of pardon?” She said, “I did not see the face of the Emperor. The only face that I could see was that of the man who was willing to die for me.”

Oh, when we get home, when we see the face of the Man who did die for us, how our hearts will praise Him! How we will rejoice in His presence as we say, “The Son of God loved me, and gave Himself for me.”

We need to realize that He died not only to deliver us from the judgment due to our sins, but He died for us in order that we might be delivered from the power and pollution of sins right here and now in this life. In Galatians 1:4, we have these words:

Our Lord Jesus Christ, who gave himself for our sins, that he might deliver us from this present evil world, according to the will of God and our Father.

He gave Himself for our sins, not simply that we might have our past sins forgiven, nor that we might stand justified before Him as to the future, but in order that the power of sin might be broken in our lives, that we might no longer be subject to Satan’s authority, that we might be free men and women, living here to the glory of the Lord Jesus.

This is one of those truths that I do want to press upon you who have but recently been brought to a saving knowledge of Christ. Dear young Christian, do not be satisfied to know that you are saved from hell, blessed as that is, but oh, go on day by day to a fuller walk with God, that you may be saved from sin, and that your whole life may be lived to His praise and to His glory

For there is one God, and one mediator between God and men, the man Christ Jesus; who gave himself a ransom for all, to be testified in due time.

They used to tell a story about a certain professor of theology at Princeton Seminary in the days when Princeton was pretty rigid as to what they called “a limited atonement.” One day one of the students looked up and said, “Professor, just what is our stand in this seminary on the atonement?” And the teacher replied, “Well, we stand with Dr.—— ; we preach the theology of Dr.———, and he taught a limited atonement—that Christ died only for the elect.” Then said the student, “And over at New Haven, Connecticut, (at that time New Haven was a very sound seminary,) what do they teach there? What is Dr. Taylor’s theology?” The professor said, “Over there they teach that God so loved the world, that He gave His only begotten Son, that whosoever believeth in Him should not perish, but have everlasting life.”

“Oh,” said the student, “well, I’ll accept that because that is what the Bible says. That is not just Dr. Taylor’s theology or New Haven doctrine; that is the Word of God.”

And so we say to you, whoever you may be, the Lord Jesus gave Himself a ransom for all. On Calvary’s cross He put away sin by the sacrifice of Himself. In other words, when He presented Himself there as a substitute for guilty humanity, He finished the work that satisfied every righteous demand of the Throne of God and met all the claims of His holy nature, so that on the basis of it, any poor sinner in all the world who comes to Christ and puts in his claim will be saved on the basis of the substitutionary work of our Lord Jesus Christ. That is the doctrine of the atonement as we have it in the Bible. There is no other in this blessed Book, and so we put the question to you: have you put in your claim? There are a lot of people who know all about it, but they have never believed and acted upon it.

You remember the incident of the veteran of the Civil War who was found living in wretched poverty. The city authorities found him in such a deplorable state that they thought all they could do was to take him to the county poor farm. One of them happened to notice something on the wall. It wasn’t exactly a picture; “it looked more like a document of some kind. He took it down and looked at it, then he asked, “What is this, my friend?” The poor old man replied, “That was sent to me by Abraham Lincoln himself, and I kept it because it has his signature on it.” It turned out to be a check. I forget the amount of money, but it was really a pension check signed by the President and sent to this man years ago. Instead of cashing it, the poor man had kept it all the time, and had framed it and hung it there on the wall. In the meantime he got poorer and poorer, until he was a candidate for the county farm. They found that the government at Washington would still honor the check, although it was years old, and so they had enough to take care of the man comfortably until he died.

Oh, do not be content just to have the statement of the substitutionary work of the Lord Jesus, but come to Him for yourself, trust Him as your own Saviour. Cash in on it. He gave Himself a ransom for all.

The rest of the book is available online here.
This post originally appeared at BeyondCalvinism where comments can be made.