It’s the St. Eutychius edition of the Friday Files, SEA’s weekly grab-bag of articles from the SEA archives, and relevant recent articles regarding Arminian/Calvinist issues.

SEA member names are highlighted in blue. The views expressed in the articles (and views expressed in K.W. Leslie’s summaries) are not necessarily those of SEA, particularly the articles by Calvinists—although as sisters and brothers in Christ, we do agree more often than not. Just not when it comes to soteriology, ’cause limited atonement? Really? From a God who wants all people saved? [1Ti 2.4] Yeesh.

From the SEA archives:

H. Ray Dunning, Holiness Today.
• “Are we saved by grace?”
[2013] Westerners struggle to imagine a form of salvation which doesn’t include merit.

John Goodwin.
• Redemption Redeemed: Wherein the Most Glorious Work of the Redemption of the World by Jesus Christ, Is Vindicated Against the Encroachments of Later Times.
[1651, various formats] Goodwin’s biblical defense of five-point Reformation Arminian theology.

Robert Hamilton.
• “Does Hebrews 6:6 teach that apostasy is without remedy?”
[2001, PDF] Hamilton doesn’t think so: In context, the text is about currently correcting apostates, but doesn’t preclude the possibility of later successfully correcting them.

Douglas W. Kennard.
• “Petrine redemption: Its meaning and extent.”
[Dec 1987, PDF] When the apostle Peter wrote on redemption, his emphasis was how our lives have changed in Christ.

Vic Reasoner.
• “Does God have an eraser?”
[2013, PDF] The overcomers in Revelation’s letters to the seven churches: What do they tell us about perseverance?

Laurence Womack.
• “The fifth article of the Remonstrants. (Perseverance.)”
[1 Apr 2013, PDF] As presented to the Calvinists at the Synod of Dort; Womack included the scriptural references.
• The Examination of Tilenus Before the Triers.
[1638, various formats] The book from which the previous article was taken, in which Womack did the same with all the articles of the Remonstrants.

In case you haven’t yet seen the “Who’s a good boy?” meme: 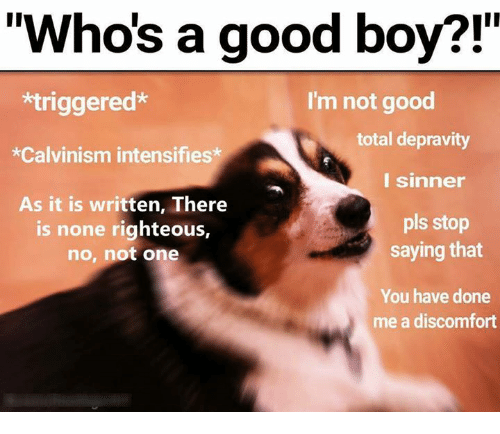 Pretty sure I’ve seen that very same look in the eyes of a cage-stager.

Todd Tomasella (KJV Only), Safeguard Your Soul.
• “The idiocy of Calvinism.”
[2 Apr 2018] Since I frequently post stuff from anti-Arminian cranks, it’s only fair the anti-Calvinists get a turn: Tomasella explains how Calvin was the devil, Calvinism a cult, and Calvinists are all going to hell. (But don’t get too comfortable, O user of the devilish NASB.)

The Friday Files focuses on Calvinist/Arminian issues, but SEA members write about all sorts of other things too. So go check out their websites and blogs. The handiest way to keep up with them is with a feedreader or news aggregator.