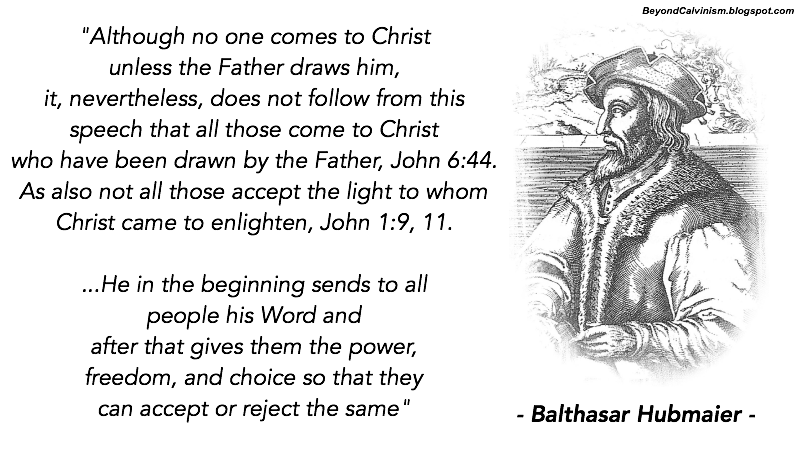 Earlier this year I began researching early Anabaptist theologian Balthasar Hubmaier (1480 – 1528).  Here is a portion of his treatise Freedom of the Will, II where he clearly affirms what would later be called the doctrine of “prevenient grace”, written May 20, 1527:

Thus God speaks through Jeremiah: “We have healed Babylon but it did not become whole; we will leave it,” Jer 51:9. Thus Christ also says to Jerusalem: “How often I wanted to gather you and you did not want it,” Matt 23:37. Thus Paul says to the Jews: “The Word of God had first to be preached to you, but since you reject it, we now turn to the heathen,” Acts 13:46.

Therefore we confess with you, dear friends, that in those people whom God has abandoned there is no freedom of will, Heb 6:4-6, 10:38. However, we set the same freedom of the will in those people drawn, illuminated, and reborn by God, for to them the power is offered and given to become children of God in the power of his Word, 2 Pet 2; John 1:12. For although no one comes to Christ unless the Father draws him, it, nevertheless, does not follow from this speech that all those come to Christ who have been drawn by the Father, John 6:44. As also not all those accept the light to whom Christ came to enlighten, John 1:9, 11. However, it does not follow that God is without power, for it is just his revealed will that he in the beginning sends to all people his Word and after that gives them the power, freedom, and choice so that they can accept or reject the same, as has been said sufficiently above, Mark 16:15; John 1:16. (Balthasar Hubmaier, “Freedom of the Will, II” in Balthasar Hubmaier: Theologian of Anabaptism, trans & ed. Pipkin & Yoder (1989) at page 477)

Earlier in the same piece he discusses the question of why some respond in faith while others reject the gospel.  He writes:

Since, however, this sonship is offered to all people equally, for the seed of the divine Word falls equally in four kinds of earth, it follows that we have the equal power to accept the seed and to bear fruit, John 1:12; Matt 28:19; Mark 16:15; Matt 13:3ff; Mark 4:3ff. If we do not do that, then it is not God who is guilty, or his seed, but the evil of the earth, that is, we ourselves.

Thus Peter hears Christ, accepts his Word, and brings forth fruit, John 1:42. Herod also hears it, however, does not accept his Word, and does not bear fruit. Now that is the fault of the wickedness of Herod.

Since, however, Peter and Herod are alike sinners and evil, the reason why his inborn evil does not harm Peter and yet harms Herod is that Herod follows his inborn evil and walks according to it, but not Peter, Eph 3; 1 Cor 15:45ff; Rom 8:5-9.

In addition, the fact that God looks at Peter and moves him to lament his sins has to do with the mercy of God, Matt 26:75. That he does not look at Judas is the fault of the traitor who sold innocent blood for thirty pennies. He had to sentence himself and say, “I have sinned in that I have betrayed innocent blood,” Matt 27:4.

I first heard of Hubmaier from Roger Olson, who called him an “Arminian before Arminius” in one of his posts (link).  He expands on this in The Story of Christian Theology: Twenty Centuries of Tradition and Reform (1999), where he dedicates chapter 26 to discussing the Anabaptists; there, commenting on Hubmaier, Dr Olson writes:

Hubmaier’s defense of free will follows Erasmus’s in On the Freedom of the Will very closely except that the Anabaptist Reformer attributed human free will to Christ’s and the Holy Spirit’s action rather than to a natural capacity that survives the Fall into sin. According to Hubmaier, by sinning Adam and Eve and all their posterity lost free will and fell into bondage to sin: “If now God the heavenly Father had not come to our help with a new and special grace through Jesus Christ, his most beloved Son, our Lord, we would all have to remain in this blindness, die and be eternally lost.” God’s revealed will for universal salvation is clear in Scripture, however, and “he…sends to all people his Word and after that gives them the power, freedom and choice so that they can accept or reject the same.” What Hubmaier was proclaiming as the basis of free will is what other theologians call prevenient grace–the resistible grace of God that calls, convicts and enables. Hubmaier also claimed that God’s election and predestination are based entirely on his foreknowledge of which individuals will respond to his grace and how. He was adamantly opposed to unconditional predestination–the monergism of Augustine, Luther, Zwingli and Calvin: “That would be perfidious God who would invite all people to a supper, offer his mercy to everyone with exalted earnestness, and would yet not want them to come, Luke 14:16ff; Matt. 22:2ff. That would be a false God who would say with the mouth, ‘Come here,’ but would think secretly in the heart, ‘Stay there.’” (p 422)

Dr Olson adds, “This is basically the same theology of salvation that the Dutch Remonstrants–followers of Jacob Arminius–later developed in the early seventeenth century.”