Home Arminianism The Making of a Classical Arminian 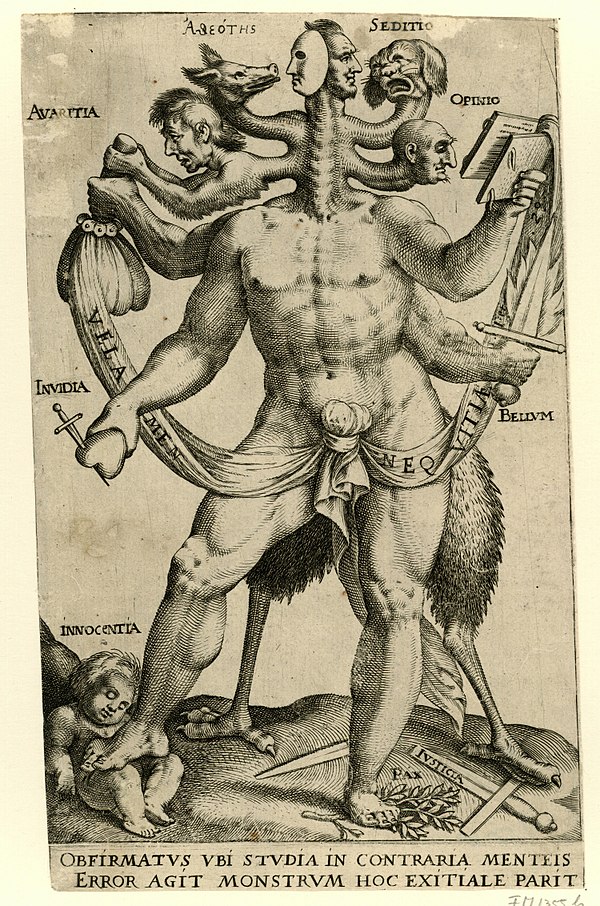 The lovely picture to your right is a Dutch-Calvinist work naming Arminianism a five-headed, four-footed, part man, part beast, monster. The five-fold head of this monster represents the head of Avarice, Deceit, Riot (or Sedition), Imagination (or Opinion) and Stupidity (imagined as the head of a pig). In the hands of this five-headed beast is held Envy and War. The treacherous monster is trampling upon Peace, Justice and Innocence, represented as a child.

In order to understand the significance of this portrait, keep in mind that people during this era were not as used to vile images as we are in our culture today, through the venue of film. Images of horror, violence, and disgust were produced by artists drawing images. To the uneducated mind, a portrait such as this one would frighten, giving the individual a mindset that any notion related to Arminian theology is to be considered vile, loathsome, ungodly, violent, and detrimental not only to one’s eternal soul but also to the political arena. To be Arminian, then, is to be vile, ungodly, seditious, anti-Reformed, anti-Christ.

John Wesley is famous for suggesting: “To say, ‘This man is an Arminian,’ has the same effect on many hearers, as to say, ‘This is a mad dog.’ It puts them into a fright at once: They run away from him with all speed and diligence; and will hardly stop, unless it be to throw a stone at the dreadful and mischievous animal.” (link) A friend, who comments here often, writes: “Arminian has become a term of derision for some, and sometimes (not always) for good reason.” She is, of course, correct. “Arminian” has become a term of derision because of Calvinist misrepresentation, misapplied inferences, and complete misunderstanding; and these are merely the errors of ignorance; meaning, some Calvinists throughout history have lied about Arminius’ theology and what makes a classical Arminian, John Owen chief among them. But Calvinists cannot assume all the blame.

Some people are Arminians and do not realize the fact. In order to see if this is unwittingly true of you, see the post, “Are You an Arminian and Don’t Even Know It?” Some reject the Arminian banner because they hold to the doctrine of Perseverance, as do Calvinists, and they imagine that Arminianism proper is not a fitting category for them. Some of these same individuals consider themselves a “two-point” Calvinist, holding to the doctrine of Total Depravity, as well as Perseverance of the Saints. (Most Calvinists, rightly, are horrified by the notion of a two-point Calvinist.) Most Southern Baptists fit into this category. They consider themselves Traditional Southern Baptists — a recent concept that defines its position in terms of being non-Calvinistic and, properly, non-Arminian.

There are many who calls themselves Arminian but hold to Perseverance (that a person will not forfeit salvation by rejecting Christ because the Spirit of God is keeping such a one in the faith of Christ). This notion is hotly debated among some Arminians, just as “four-point” Calvinism is hotly debated by some Calvinists, their preference for all five points and no less for Calvinist adherents. For some, the concept of conditional perseverance (that a person is free to reject Christ even after being regenerated by grace through one’s initial faith in Jesus) is Arminianism 101, as outlined by the Remonstrants in their “Opinions of the Remonstrants” of 1618 and demonstrated in their Arminian Confession of 1621. I tend to agree with this notion, but I am also sympathetic, and I merely refer to such “Arminians” as being inconsistent. Anyone willing to adopt the nomenclature “Arminian,” and the negative baggage attached to it, is welcome from my perspective.

Calvinists like James White eagerly aspire to making Open Theism the only consistent form of Arminianism: “Open theism truly is the only consistent Arminianism.” (link) This inane comment is tantamount to me insisting: “Hyper-Calvinism truly is the only consistent Calvinism.” Calvinists reject and refute the statement. Open Theists agree with Arminians that God has conditionally elected to save people through Christ; that Christ died for all but that only those who graciously receive Christ by faith shall be saved; and that God’s grace is resistible. But semi-Pelagians also adhere to these notions without being deemed classical Arminian in their theology. As a matter of fact, some Open Theists use semi-Pelagian and Pelagian notions in their language regarding free will and human capability. Open Theists may agree with classical Arminians soteriologically; but theologically, most obviously with the doctrine of omniscience, Open Theists are not classically Arminian.

THE MAKING OF A CLASSICAL ARMINIAN

In order to be considered a classical Arminian the individual must believe:

Classical Arminianism is inherently Protestant and Trinitarian in nature and rejects all forms of non-Trinitarian theory, considering such as heresy, and especially those forms that reject the divinity and deity of Jesus Christ, considering such damnable heresy. Other issues, such as sacraments (how many and their use), church governance, practice of charismatic spiritual gifts, end-times views, aspects related to worship (liturgical, traditional, charismatic), perspectives on creation theories, proper mode of and proper candidate for baptism, we recognize that all believers will maintain varying convictions whether classically Arminian or otherwise. In other words, there is not an “Arminian view” on such issues: genuine classical Arminians may disagree on such beliefs.

Arminius’ Old Reformed Church of Amsterdam was liturgical, obviously non-charismatic, pædobaptistic, Presbyterian, and amillennial, but so were the Calvinist churches of his time. Those who may properly claim classical Arminianism as their own include those from the following traditions: Free Will Baptist, Southern Baptist (with, most likely, a caveat concerning the doctrine of perseverance), Anabaptist, Churches of Christ, Disciples of Christ (Christian Church), Anglican or Episcopal, Methodist (though most Methodists are Wesleyan-Arminians rather than classical Arminians), Nazarene, Pentecostal (Charismatic, Third Wave: e.g., Assemblies of God, Church of God, Independent et al.), Eastern Orthodox, Seventh-Day Adventist, among other, lesser-known traditions. Not included in this list are traditions opposed to classical Arminian theology, such as: Roman Catholic, Presbyterian, Congregationalist, Reformed Baptist (an oxymoron), Lutheran, Oneness Pentecostal, Quaker, Amish, Unitarian-Universalist, among other, lesser-known traditions.

Issues of Semi-Pelagianism and Open Theism have existed for centuries, and all respective parties have drawn their theological lines in the sand, denoting what makes for a proper candidate within a theological tradition. Semi-Pelagians (clearly, Pelagians) and Open Theists are informed by classical Arminians that their views are incongruous with Reformed Arminian theology. But what about contemporary issues, like same-sex marriage, the ordination of homosexuals in same-sex relationships, or women in ministry? Can one promote such and be classically Arminian?

Another contemporary issue worth noting is the doctrine of Biblical Inerrancy. I have written several posts on this issue and they are worth reading: “Inerrancy and Scripture in the Arminian Tradition,” “Scripture: Arminius in His Own Words,” and “The Remonstrants on the Authority of Scripture.”  Some classical Arminians adhere to Norman Geisler’s views on Inerrancy. Other Arminians, such as myself, adhere to Craig Blomberg’s views on Inerrancy. Still others are more comfortable affirming the Infallibility of Scripture without affirming the strictures of Inerrancy. If one is prone to be classically Arminian, intending to be faithful to Arminius and the Remonstrants, then nothing less than some form of Inerrancy is necessary. SEA states: “We believe the Scriptures as originally given by God, both Old and New Testaments, to be the inspired Word of God, infallible, entirely trustworthy, and the supreme authority in all matters of faith and conduct.” (link) Here is a bare-bones confession of classical Arminian belief on Scripture. Consider joining with us today!