From the NIV Cultural Backgrounds Study Bible, edited by Craig S. Keener and John H. Walton. This article explains how Egyptians would have understood their pharaoh’s heart “hardening.” It’s similar to the ideas expressed in Dorian G. Coover Cox’s “The Hardening of Pharaoh’s Heart in Its Literary and Cultural Contexts.” [PDF] 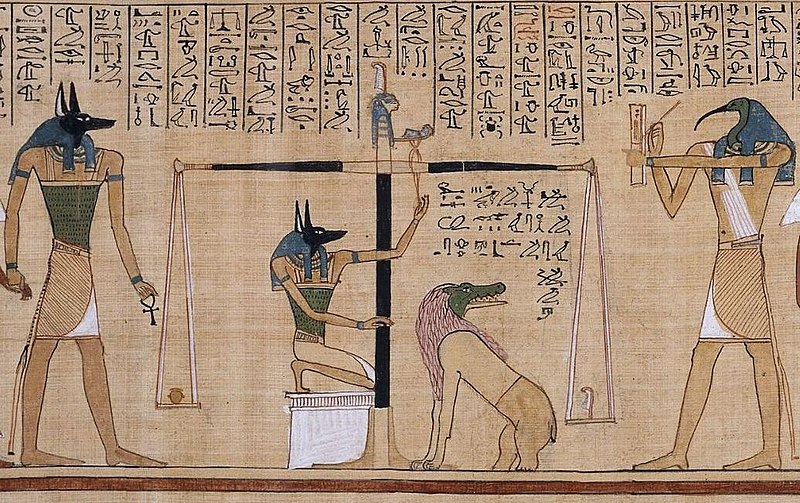 Above: A detail of the Papyrus of Hunefer, showing the god Anubis weighing Hunefer’s heart on the scale of Maat, while the god Thoth records the result. [Wikimedia]

“But when Pharaoh saw that there was relief, he hardened his heart and would not listen to Moses and Aaron, just as the LORD had said.” Exodus 8:12.

Scholars tend to agree that the meaning of this and similar expressions probably find their background in Egyptian terminology and beliefs. But there is disagreement as to which aspect of Egyptian culture provides this background. One view relates the concept of a hard heart to the judgment that ancient Egyptians believed would take place in the afterlife. Much of this belief is revealed in the document known as the “Book of the Dead.” A portion of this text describes the judgment scene at which the heart of the deceased is weighed on a scale to determine if it is heavier than the feather that represents the Egyptian conception of what is right and just. If not, the deceased is granted great favor in the afterlife. If it is, the creature Ammit (also known as the “Devouress” or “Swallower”) will consume the deceased. The Biblical expressions about a hard or strong heart, according to this view, are actually about a heavy heart. Each time the text says that Pharaoh’s heart grows hard or strong, it means that his heart grows heavier; i.e., he becomes more and more guilty when compared to the standard of what is right. At times, Yahweh is said to be the one to “harden” the heart of Pharaoh, which refers to Yahweh’s judging Pharaoh to be guilty of wrongdoing, even though ancient Egyptians believed their king could do no wrong.

There is another view, however, that points to Egyptian expressions that appear to be the functional equivalents of the Biblical language. One of these, which means lit. “heavy-hearted,” is often used of those who have great self-control and are able to refrain from speaking rashly. The expression could be translated “levelheaded.” Another expression means “stouthearted” and refers to those who have great courage and determination. Perhaps, then, the Biblical text is attempting to use these expressions in a way that Egyptian texts most certainly would not. Whereas the latter speak positively of a heart that grows hard, heavy or strong, the Exodus passages use this language to render a severe critique of the Egyptian king. In fact, the Biblical text may be offering a caustic satire on these Egyptian ideas. By strengthening Pharaoh’s heart, Yahweh is giving the king exactly what he wants—stoutheartedness, a concept highly prized by the Egyptians. In this case, however, getting what he wants leads Pharaoh and his land straight to disaster. On the other hand, it is generally not Yahweh who “makes heavy” Pharaoh’s heart. It is instead Pharaoh himself who heaps the guilt of wrongdoing—assuming this is the import of a heavy heart—on himself and thereby dooms himself to punishment.

Both views have some evidence in their favor. The second view connects the Hebrew phrases to Egyptian terminology that is indeed similar. None of this terminology occurs in the accounts of the judgment scene involving the weighing of the heart. Nevertheless, the first view seems able to explain the “hardening” process in a way that fits with the tendency of Exodus to condemn Pharaoh and his actions.

Whatever the case might be, we need to recall that God’s hardening of Pharaoh’s heart is not what is bringing Pharaoh under judgment—he has already come under judgment, as have the people and gods of Egypt. This act is only a means of giving them what they have so richly earned.”