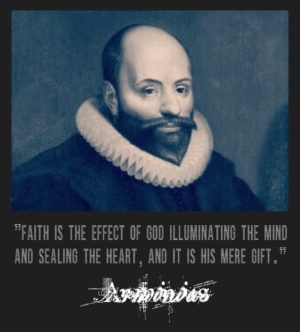 When Calvinists accused Jacobus Arminius of insisting that faith in Christ is not the gift of God, he responded: “I never said this, I never thought of saying it, and, relying on God’s grace, I never will enunciate my sentiments on matters of this description in a manner thus desperate and confused.” He also rejected the idea that “faith depends partly on the grace of God and partly on the powers of Free Will,” as well as the theory that “if a man will, he can believe or not believe” whensoever he wills, which is semi-Pelagianism. (Jacob Arminius, “Apology against Thirty-One Theological Articles,” in The Works of Arminius, the London edition, three volumes, trans. James and William Nichols (Grand Rapids: Baker, 1996), 2:51.)

Scripture is quite clear that faith is a gift (Philippians 1:29). Ephesians 2 tells us that we are saved by grace through faith, and not works so no one can boast. If genuine faith was something we could produce then we could certainly brag about how we have obtained grace; however, if we can honestly take no credit, as Ephesians 2 says, then faith must be a gift. So that begs the questions: if faith is a gift, does God give this gift to everyone? And if so, why isn’t everyone saved by grace as a result?

The answer is simple. Romans 1 tells us that there is obvious proof God exists, so men are without excuse. But like any gift, faith can be accepted or rejected. Think of it like this: You’re a child at Christmas time. Your father goes out on Christmas Eve to get you that one special gift. After hours of driving and going from store to store, and standing in line, the gift is purchased and placed under the tree. On Christmas morning the gift is given to you. Keep in mind that this is a gift, freely given to you. You didn’t pay for it, nor did you put in the effort to get it. Since you didn’t search and stand in line for hours, and since you didn’t pay for it, does this mean that you have to receive it? Of course not. In the same way, our salvation has been paid for. Jesus endured the wrath of God on our behalf. He did the work and He paid the price. Now the gift of salvation is freely offered to all who would receive.
.
So what about those who receive this gift of salvation? Are they forced to keep this gift forever? If faith is a gift that can initially be received or rejected, then it also stands to reason that it is a gift that can be kept or abandoned. Colossians 1 tells us that we will be “presented blameless IF you continue in faith”. However, you should never live in fear of “losing” your salvation, nor do you have to get saved all over again every time you stumble.
Think of salvation as the biggest, most amazing and wonderful gift you’ve ever had. This gift is precious to you, and since it’s so big and amazing, it’s not something that can easily be lost or misplaced. And it’s definitely something you’d be crazy to give up! But the fact still remains: you aren’t forced to keep it.
Just think about how inconvenient it is to return gifts after Christmas. You have to make sure you have your receipt, you have to drive all the way back to the store it came from, stand in long customer service lines … you get the idea. It’s the same with our salvation. You have to willingly put forth an effort to give it up. Salvation is a gift that can’t be merely “lost” or misplaced. And this gift is also strongly guarded by the best security system in the universe, so that no demonic or worldly intruder could ever steal it from you. (John 10:29)