Home Arminianism Romans 9 in the Wider Context of Pauline Thought

In a recent essay, I argued that John Piper fails in his attempt to reconcile the doctrine that God desires all to be saved with the doctrine of unconditional election. However, one may reply that the Bible teaches both doctrines, and therefore both must be affirmed, even if they appear incompatible. But does the Bible really teach both doctrines? I agree the Bible teaches that God desires all to be saved, but does the Bible teach that God selects which individuals will be saved? Those who answer in the affirmative often appeal to Romans 9. Nevertheless, when Romans 9 is read in the wider context of Pauline thought, I do not believe that it can be used successfully to support the doctrine of unconditional election.

The following chart lists six passages which illuminate Paul’s argument in Romans 9, as well as key words from Romans 9 which appear in these passages.

1) Romans 4:9-18 addresses the same question Paul raises in chapter 9: who are the children of Abraham? In chapter 4, the answer is clear: Abraham is the father of all who have faith. This echoes Paul’s previous statement in 2:28-29, “He is not a Jew who is one outwardly…but he is a Jew who is one inwardly.” The notion of an outward Jew who is not an inward Jew explains Paul’s statement in 9:6, “They are not all Israel who are of Israel.” Paul is therefore not advancing a new doctrine of election. The doctrine of election remains unchanged from the OT to the NT: the elect people are the children of Abraham. Paul’s genius is identifying the children of Abraham, not as his ethnic decedents or even as those proselytes who accept circumcision and the law, but rather as all “who are of the faith of Abraham” (4:16).

2) In Galatians 3-4, Paul makes the same argument he made in Romans 4: “those who are of faith are sons of Abraham” (3:7). Paul goes on to explain the logic behind this assertion. First, Paul notes that the “seed” in Genesis is singular: “Now to Abraham and his Seed were the promises made. He does not say, ‘And to seeds,’ as of many, but as of one, ‘And to your Seed,’ who is Christ” (3:16). Secondly, Paul asserts, “As many of you as were baptized into Christ have put on Christ” (3:27). Therefore Paul can conclude, “If you are Christ’s then you are Abraham’s seed, and heirs according to the promise” (3:29). In other words, God’s chosen people are not defined by their ethnicity but by their relationship to Christ, as illustrated in the image below. 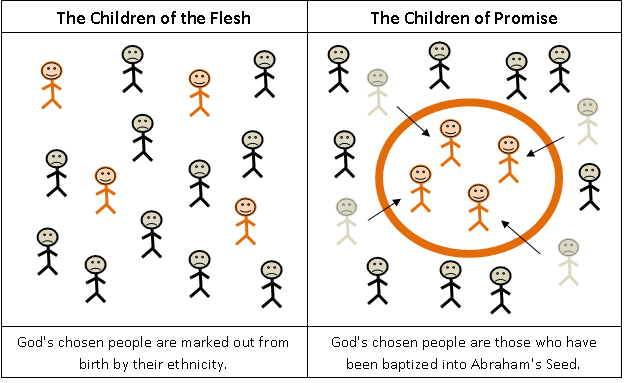 As in Romans 9, Paul moves on in Galatians 4 to cite the story of Isaac and Ishmael. He explicitly identifies this story as “symbolic” (4:24). Therefore, we must not conceive of Isaac as an example of a man elected to salvation and Ishmael as an example of a man elected to damnation. (Recall that in Genesis 15:2-4, Abraham’s faithful servant Eliezer was, like Ishmael, rejected as Abraham’s heir; surely this does not mean Eliezer went to hell.) Isaac and Ishmael are symbolic representatives of two groups of people. Ishmael was the child of Abraham’s own scheming; he was “born according to the flesh” (4:29) and thus represents those ethnic Israelites who seek justification through the law. Isaac, on the other hand, was “born according to the Spirit” (4:29) and thus represents all those who “receive the promise of the Spirit through faith” (3:14). God’s choice of Isaac over Ishmael is therefore symbolic of his choice to save all who believe in Jesus, regardless of works.

3) In Romans 9:16, Paul states that salvation is “not of him who wills.” Because the term “free will” has become associated in modern usage with the act of faith, some interpret 9:16 as an argument against the notion that one’s election is conditioned on faith. However, in Paul’s exposition of the gospel from 1:16 to 8:39, the verb “will” occurs only in 7:15-24. In this passage, as in 9:16, Paul addresses the impotence of the will to achieve salvation. However, Paul never speaks of the man who “wills to have faith”; Paul speaks of the man who “wills to do good” (7:21). Thus, given the immediate context of 9:6-14, particularly verse 11, when Paul speaks in 9:16 of “him who wills,” he is speaking of the person who strives to do good.

4) Paul’s discussion of hardening in Romans 9 must not be divorced from the rest of the discussion in chapter 11. In 11:8 Paul cites Isaiah 29, a passage which identifies the blindness of Israel as a punishment for a prior rejection of God (29:13-14). Furthermore, Paul argues in 11:11-26 that the punishment of hardening is actually part of God’s gracious plan to save the very people who have been hardened! Note that the language of “jealousy” echoes the threat of the exile in Deuteronomy 32:21, a passage which Paul cites in 10:19. Just as God blinded Israel (Deut. 28:28) and drove them into exile (Deut. 28:64) for the ultimate purpose of bringing about a lasting repentance and a circumcision of the heart (Deut. 30:1-6, note allusion in Rom. 2:28-29), even so “blindness in part has happened to Israel” so that “all Israel will be saved” (Rom. 11:25-26). While the realization of this full salvation is in the future, Paul hopes that his ministry will even now result in the salvation of “some” (11:14). In The Justification of God, John Piper suggests that the “some” who are saved in 11:14 are not part of the “rest” who are hardened in 11:7, but this interpretation seems untenable. The “some” of 11:14 will be saved through “jealousy,” but in 11:11, the “jealousy” is clearly provoked in those who “stumble.” It is therefore the very people who have been hardened whom Paul hopes to save.

6) In Romans 9:15-18, Paul argues that God has mercy on whomever he wills. But on whom does God will to have mercy? We need only keep reading. Paul’s argument in Romans 9-11 culminates in the declaration: “God has committed them all to disobedience, that he might have mercy on all” (Rom. 11:32). The verb translated here as “committed” occurs elsewhere only in Galatians 3: “The Scripture has confined all under sin that the promise by faith in Jesus Christ might be given to those who believe” (3:22). Notice that the “promise” is not something one possesses from eternity past. One must become a child of promise through faith in Christ, and before this can happen, one must be brought to the end of oneself. Thus God’s hardening of Israel is actually an expression of his merciful desire to transform the “children of the flesh” into the elect “children of the promise” (9:8).

In conclusion, note the seamless transition from Paul’s exposition of election in Romans 9 to the proclamation of Romans 10: “Whoever calls upon the name of the Lord shall be saved” (10:13). Paul can only make such a proclamation because God has elected to save all who believe in Jesus. The doctrine of election is therefore not some frightening theological mystery; it is the heart and soul of Paul’s gospel. Not only is divine election compatible with God’s desire for all to be saved, it is the very expression of that desire.

Murray Vasser is a Ph.D. student at Asbury Theological Seminary and a graduate of Talbot School of Theology. He blogs here.