Home Arminian/Calvinist Brotherhood Joshua Woo Sze Zeng, “James Arminius on the Significance of John Calvin’s Works”
I came across this interesting statement wrote by James (or Jacobus) Arminius, the founder of Arminianism:

“After the holy scriptures, I exhort the students to read the Commentaries of Calvin… for I tell them that he is incomparable in the interpretation of scripture; and that his Commentaries ought to be held in greater estimation than all that is delivered to us in the writings of the ancient Christian fathers: so that, in a certain eminent spirit of prophecy, I give the preeminence to him beyond most others, indeed beyond them all. I add, that, with regard to what belongs to common places, his Institutes must be read after the Catechism, as a more ample interpretation. But to all this I subjoin the remark, that they must be perused with cautious choice, like all other human compositions.”
(Quoted in John Scott, Calvin and the Swiss Reformation [London: R. B. Seeley and W. Burnside, 1833], pp.403-404.)

Reading such an elevated praise for Calvin by his most famous theological nemesis is as much surprising and exciting. But there is one problem: Scott quoted this statement without footnote! This means we cannot be sure if Arminius really wrote that.
I tried to trace the original source by looking up the other neighbouring footnotes, but to no avail. All the trails lead to some volumes of Christian Observer published in the 19th century. Yet none of them contain this statement. All I know is that some of these documents mention that this statement was written two years before Arminius died.
Then I tried to look through Arminius’ works readable at Wesley Center website. Still, I could not locate the source.
After spending hours in my day-off (I should be watching a movie or something!) searching for the origin of this statement, I came to my sense: Probably this statement was fabricated by Calvin’s fans in the 19th century to popularise their theological hero. So I gave up the ad fontes adventure.
When I almost switch off the laptop, I was prompted to google “arminius two years before death calvin”. So I did.
That led me to Mark A. Ellis’ essay ‘The Arminian Confession of 1621’ hosted at Society of Evangelical Arminians website. On the fourth page of the essay, Ellis wrote:

“…a letter Arminius wrote two years before his death: “But after the reading of Scripture, which I vehemently inculcate more than anything else, which the entire academy can testify and of which my colleagues are conscious, I encourage the reading of the commentaries of Calvin, which I extol with the greatest praise…. For I say that he is incomparable in the interpretation of Scripture, and his comments are better than anything which the Fathers give us.””

And Ellis included the citation!
The endnote says that it is taken from Arminius’ letter to Sebastian Egbert, 3 May, 1607, which is published in a Latin book edited by Christiaan Hartsoeker and Philippus van Limborch, titled Præstantium ac eruditorum virorum epistolæ ecclesiasticæ et theologicæ (Amsterdam: Henricum Wetstenium, 1660), 236-37.
Never mind the Latin, the fact that this came from an Arminian source shows that the statement could, after all, be genuine. Besides, it is dated to 1607—two years before Arminius’ death in 1609.
With this new lead, my investigation started again. And after a few rounds, I finally landed onto the Europeana website, which is a “source of cultural heritage” funded and maintained by the “Europeana Foundation and a large number of European cultural institutions, projects and partners.”
This website contains the scanned image of Arminius’ actual 3 May 1607 letter to Egbert! So Arminius did hold Calvin in high esteem.
Here’s the image (anyone of you who knows Latin can help to translate it?): 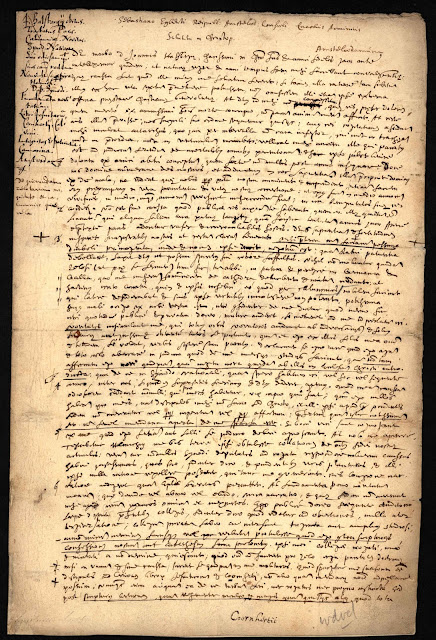 [This post was taken from the author’s blog, Sze Zeng: Theology and Life]