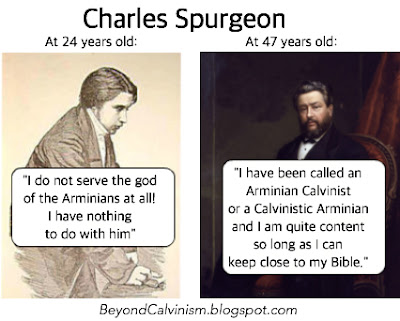 On Twitter, I recently got into an exchange with someone who posted Spurgeon’s troubling statement:

I do not serve the god of the Arminians at all! I have nothing to do with him and I do not bow down before the Baal they have set up! He is not my god, nor shall he ever be! I fear him not, nor tremble at his presence. A mutable god may be the god for the Arminian—he is not the god for me.

In looking up the source, I noticed the year this sermon was preached: 1858, the same summer that Spurgeon turned 24 years old.  At this point, he had been a pastor for just 4 or 5 years, and had been a Christian for only 8 years.

Author Dave Hunt has noted, “especially in his later years, Spurgeon often made statements that were in direct conflict with Calvinism.” (What Love Is This?, p 38).  When I began to look at which year each of his other sermons were preached, I noticed this trend holds true.

Any sermon from the 1850s shows Spurgeon as hostile towards Arminians, especially on the doctrine of perseverance.

But by 1860, someone had apparently given him a translation of Arminius’ works (from which he quotes), and—perhaps as a result—instead of attacking Arminians we find Spurgeon defending Arminians from the charge that we deny Total Depravity (bold mine):

And now, having thus sought to explain the text in regard to the Christian, let me try to support it. I would support it, first of all, by the common consent of all Believers in all ages. With the exception of ancient Pelagians and their modern off-spring, I do not know that the Church has afforded any instance of any professors who have doubted the inability of man apart from God the Holy Spirit. Our confessions of faith are nearly unanimous upon this point. But I hear someone say—”Do not the Arminians believe that there is natural strength in man by which he can do something?” No, my Brothers and Sisters, the true Arminian can believe no such thing! Arminius speaks right well upon this point. I quote his words, as I have them in a translation—

“It is impossible for free will, without Grace, to begin or perfect any true or spiritual good. I say, the Grace of Christ, which pertains to regeneration is simply and absolutely necessary for the illumination of the mind, the ordering of the affections, and the inclination of the will to that which is good. It is that which operates on the mind, the affections, and the will, which infuses good thoughts into the mind, inspires good desires into the affections, and leads the will to execute good thoughts and good desires. It goes before, accompanies, and follows; it excites, assists, works in us to will, and works with us that we may not will in vain. It averts temptations, stands by and aids us in temptations, supports us against the flesh, the world, and Satan; and in the conflict, it grants us to enjoy the victory. It raises up again those who are conquered and fallen; it establishes them and endues them with new strength, and renders them more cautious. It begins, promotes, perfects and consummates salvation. I confess that the mind of the natural and carnal man is darkened, his affections are depraved, his will is refractory, and that the man is dead in sin.”

Richard Watson, who among modern Arminians is considered to be a standard divine, especially in the Wesleyan denomination, is equally clear upon this point. He fully admits that, “The sin of Adam introduced into his nature such a radical impotence and depravity, that it is impossible for his descendants to make any voluntary effort (of themselves) towards piety and virtue,” and then he quotes with warm approval, an expression of Calvin’s, in which Calvin says that, “Man is so totally overwhelmed, as with a deluge, that no part is free from sin, and therefore, whatever proceeds from him is accounted sin.” It is very satisfactory to have these testimonies to the common Doctrine of the Church. I know that some Arminians are not so sound, even as Arminius or Richard Watson; I know that some of them do not understand any creed at all, not even their own, for in all denominations there are men so ignorant of all theology that they will venture upon any assertion whatever, claiming to be Arminian, or Calvinistic, without knowing what either Calvin or Arminius taught! Arminians would be much better, even if they were as good as Arminius! Much as he swerved from the faith in some respects […] but in many points would be as stern and unflinching a defender of the faith as John Calvin, himself!

By 1862, when Spurgeon was 28 years old, we find him saying that there is truth in both Calvinism and Arminianism, and that we should not go to either extreme (bold mine):

That “salvation is of the Lord” is as plainly revealed in Scripture as anything that we see in nature! And that destruction is of man, is equally plain, both from the nature of things and from the teaching of Scripture! Hold the two Truths of God—do not try to run to the extreme, either of the Hyper-Calvinist or of the ultra-Arminian. There is some truth in Calvinism and some in Arminianism, and he who would hold the whole Truth of God must neither be cramped by the one system nor bound by the other, but take Truth wherever he can find it in the Bible—and leave it to the God of Truth to show him, when he gets into another world, anything that is beyond his comprehension now.

By the time Spurgeon is 42 (in 1876), he would say that Calvinism is wrong on some points when compared with Arminianism (bold mine):

There has long been a great doctrinal discussion between the Calvinists and the Arminians upon many important points. I am myself persuaded that the Calvinist alone is right upon some points, and the Arminian alone is right upon others. There is a great deal of truth in the positive side of both systems, and a great deal of error in the negative side of both. If I was asked, “Why is a man damned?” I should answer as an Arminian answers, “He destroys himself.” I should not dare to lay man’s ruin at the door of divine sovereignty. On the other hand, if I were asked, “Why is a man saved?” I could only give the Calvinistic answer, “He is saved through the sovereign grace of God, and not at all of himself.” I should not dream of ascribing the man’s salvation in any measure to himself. I have not found, as a matter of fact, that any Christian people care seriously to quarrel with a ministry which contains these two truths in fair proportions. I find them kicking at the inferences which are supposed to follow from one or the other of them, and sometimes needlessly crying to have them “reconciled;” but the two truths together, as a rule, commend themselves to the conscience, and I feel sure that if I could bring them both forward this morning with equal clearness I should win the assent of most Christian men.

Finally, by 1881, when Spurgeon is now 47 years old, he says that he has been called “an Arminian Calvinist or a Calvinistic Arminian” and he does not seem to mind either label (bold mine):

What a host of revised versions we have! Everybody has one of his own. Certain texts which will not fit into our system must be planed and cut down. Have you ever seen the hard work that some Brethren have to shape a Scripture to their mind? One text is not Calvinistic, it looks rather Arminian—of course it cannot be so and, therefore, they twist and tug to get it right. As for our Arminian Brethren, it is wonderful to see how they hammer away at the 9th Chapter of Romans—steam-hammers and screw-jacks are nothing to their appliances for getting rid of Election from that chapter![1] We have all been guilty of racking Scripture, more or less, and it will be well to have done with the evil, forever! We had far better be inconsistent with ourselves than with the Inspired Word of God. I have been called an Arminian Calvinist or a Calvinistic Arminian and I am quite content so long as I can keep close to my Bible. I desire to preach what I find in this Book whether I find it in anybody else’s book or not.

[1] For how I changed my mind on Romans 9, moving away from a Calvinistic interpretation of this passage, see: “(Re)Thinking through Romans 9”