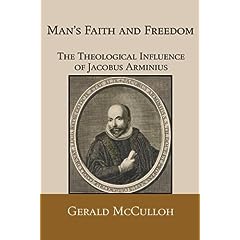 Man’s Faith and Freedom is a collection of 5 essays and a sermon presented at the 1960 Arminius Symposium in Holland in 1960. Instead of giving the overall volume mixed reviews, I will review each essay separately.

The Life and Struggles of Arminius in the Dutch Republic by Gerrit Jan Hoenderdall presents a succinct and accurate summary of the life and times of James Arminius. Arminius’ theological training and pastoral experiences in Amsterdam prepared him for professorship at Leiden, where his disagreements with Calvinistic predestination came to a head. Hoenderdall does a good job capturing the political undercurrents involved in the theological debates in Holland. The topic of debate was predestination but what were the rules and more importantly who was to preside over the debate? Arminius enjoyed some limited, hard-fought progress, but shortly after his death the Calvinists would prevail. The irony in Arminius’ life was his quarreling to gain peace.

From Arminius to Arminianism in Dutch Theology by Lambertus Jacobus van Holk traces the thought of James Arminius to that of the current Brotherhood of the Remonstrants. Sadly, Lambertus attempts to tie Arminius to universalism, moral relativism, liberal theology and the philosophy of Immanuel Kant. Since Arminius has nothing to do with these things, his account requires some quantum leaps and ultimately Lambertus concludes that Arminius would have fallen outside of present day Arminianism. Lambertus then starts advocating universalism. While I am concerned about Lambertus’ misrepresentation of Arminianism, I am more concerned that he needs to repent for the Kingdom of God is at hand.

The Influence of Arminianism in England by Geoffrey Nuttall provides an outstanding review of the history of English Arminianism. Nuttall identifies four sources of 17th century Arminianism in England: Baptists, Dutch settlers, Anglican high-churchmen and Quakers. While it’s true Quakers and Unitarians sometimes claimed to be Arminian, we really have the Socinians to thank for them. But even though Nuttal mistakenly adds in Quakers and overlooks the Arminian Puritans, he does locate the main sources of early Arminianism. In the 18th century Wesley and the Methodists take over, which Nuttall attributes not to Wesley’s theology (Wesley’s parents were both Arminian and it wasn’t rare those days) but rather to his zeal for missions.

The Influence of Arminius on American Theology by Gerald O McCulloh was my favorite essay in the book. McCulloh traces Arminianism from the American colonies to the present day. In the early days, Arminianism struggled (McCulloh notes the burning of William Pyynchon’s book on the atonement). But over time, particularly with the influence of Methodism, Arminianism starts to take root.

Arminius and the Structure of Society by James Luther Adams traces from Arminian theology to society. In particular, the concepts of individualism, freedom and the relationship between church and state were important Remonstrant ideals that impacted society. Arminius pushed for tolerance of Arminianism within the Dutch Reformed Church. After Dort, Episcopius pushed for the government to allow two churches, as opposed to one state church. The Remonstrants thought the government should be tolerant, rather than stamping out alternative churches. This idea was influential on society at large.

Faith and Wonder by Russell Henry Stafford is a sermon reminding us that we cannot read the mind of God, but unfortunately it drifts off into the anti-knowledge errors of Kant.

In summary, I was disappointed by the books links between Arminianism and liberalism, but I did think the book gave some valuable insights and historic overviews.